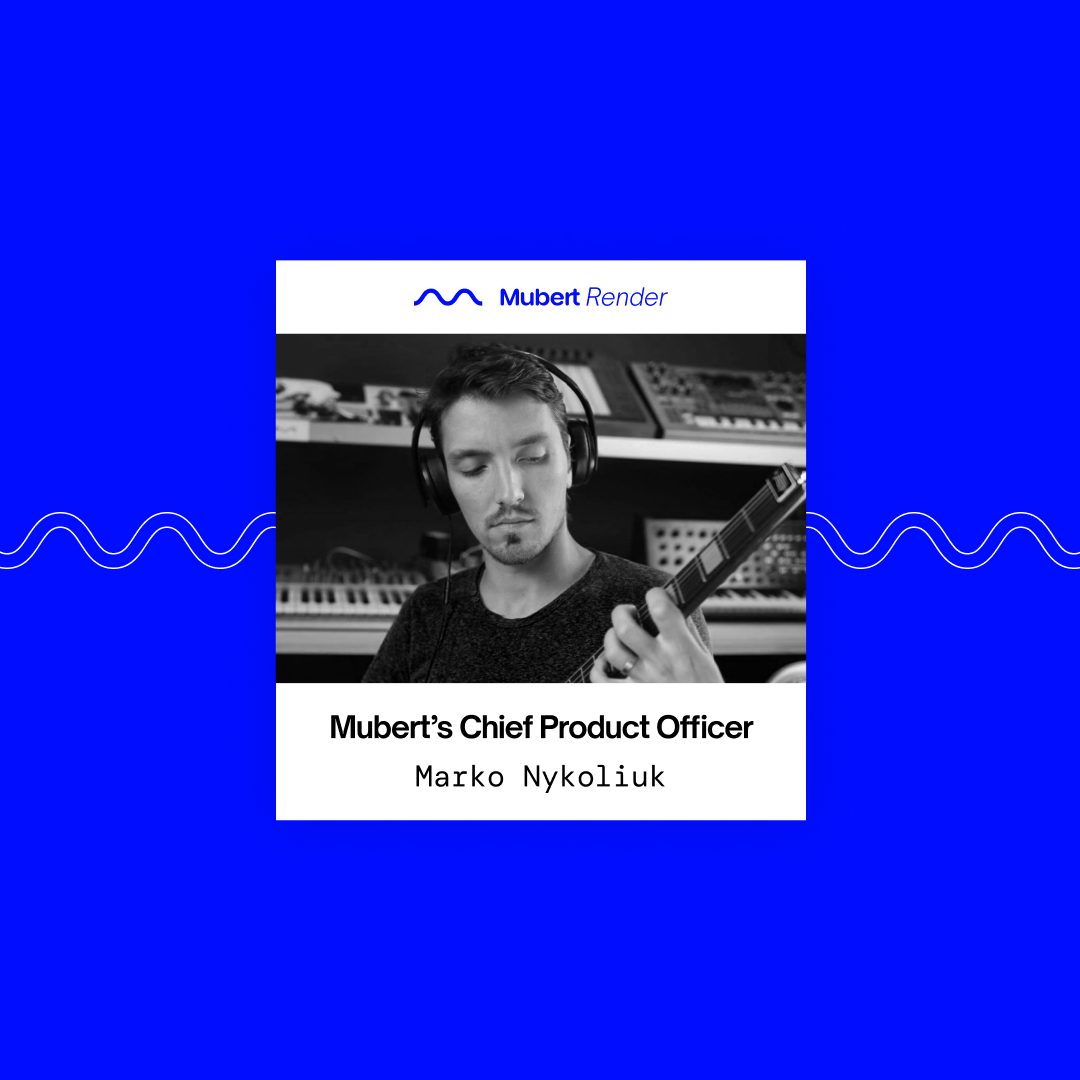 Mubert Render launched in September 2021 as part of the company’s mission to empower and protect creators. We sat down with Mubert’s Chief Product Officer, Marko Nykoliuk, to talk a little bit about the product, what inspired the concept and his vision for the future.

Initially, Mubert started out as an experiment to provide a new kind of listener experience where the music would adjust to the mood and activity (for example, fitting the running pace) of the listener. To do so, the team started with a community of musicians that brought loops to the platform and Mubert built an algorithm that could arrange them into compositions. “Rather than the musician having to compose and the listener only being able to pick and choose fully baked tracks (let’s use a pizza analogy), the musicians would bring raw ingredients, the listener would say what kind of pizza they wanted and the system would bake that pizza on the fly,” Marko explains, adding that that “pizza” could be of any size.

That was the initial interaction that the app enabled. After a number of third-party app developers requested to add that same experience to their own apps, Mubert created Mubert API, through which it licensed the service as API integrations. “As [it] developed, we saw a very large potential to use that same adaptable tech to provide a solution for content creators,” the CPO explains.

Seeing a palpable demand for music that could be molded to the specific content people were making, Mubert ran an experiment and launched stock.mubert.com, which was Render’s predecessor. “We tried it out and had really positive feedback,” Marko recounts. There was one flaw though — Stock lacked a library, which is exactly what Render included.

Once they realized that, the developers approached Stock’s users to find out what they liked and what they thought was missing in the service, making the first rendition of Mubert Render based on the feedback they gathered. Launching on Product Hunt and winning Product of the Day status, they dove right into collecting even more user responses.

In a nutshell, Mubert Render is a dynamic library of royalty-free music. Why dynamic? It consists of tracks that are being generated by a whole community of users from the large pool of samples that Mubert has. There are two main ways to approach finding royalty-free music on Render: you can generate a track by criteria like mood, genre, activity and duration, or you can use it like a typical content library where you browse through it using tags like playlists, themes, tempo, BPM and more.

“It’s a platform that connects musicians and content creators in a new kind of experience. Mubert works as a music curator, director, [and] record producer. Unlike other royalty-free platforms, musicians can bring their loops — they don’t have to be finished, polished tracks — [and] Mubert’s job is to do the heavy lifting and arrange the composition based on what the content creators want.” For content creators, this also opens up the opportunity to be more involved in the process of creating music they are actually looking for. Marko says Render can be for creators what Pinterest is for designers.

At the same time, the team is, in his words, walking away from positioning the startup as an AI black box and turning the spotlight onto the musicians behind the product. “We are looking to launch [an] “Artists” section, where [they] can sell directly to content creators,” he elaborates.

Noticing a few interesting usage applications and needs that Mubert could potentially serve, the team broke those down into a few “pockets”. The most widespread need was quickly finding a few good musical options, which rose from video editors looking to soundtrack their video content.

A closely related need is determining what is “good music” for the client, and Render helps solve that by offering playlists that are both easy to navigate and engaging. Marko says they’re also working on a feature that will let its users search by reference, meaning that anyone would be able to drop a YouTube link to a song one likes, Mubert would analyze that, and search for a similar track in its database — or generate a new one.

Another advantage that sets Render apart from other services is the longer-form music and the abundance of it. There are more and more creators interested in soundtracks for mindfulness content, whether that be yoga classes or guided meditations. As the CPO states, this is where Mubert’s music library really shines. However, long-form music content also fits other fields such as podcasts just as well as for mindfulness practices.

“Our long-term vision is bringing this new level of customizability and immediacy,” Nykoliuk conveys. “By not requiring music producers to go through the full cycle of creating music [and] letting them come up with sporadic ideas and short loops, the platform allows new combinations of sound, novel music experiments and weird zeitgeist kinds of things. And straight out the door content creators have access to new unfolded stuff that [they] can mold into [their] content.”

By providing fresh ideas that you have control over, Mubert lets you make the final product as unique as you want it to be. In comparison, other royalty-free music stocks usually give you only so many tracks to choose from, which results in content creators using the same music as other brands, making it harder to develop a recognizable personal brand.

Although Mubert Render does have a couple of primary creator categories that tend to use the product, it’s also helping a wide variety of different content creators, from game developers and vloggers to content entrepreneurs and NFT artists.

To cater to the contrasting needs of its users, Mubert developed a set of plans that, at different price points, offer various features. The free tier plan, also known as the Ambassador plan, allows you to generate up to 50 tracks per month in MP3 format and use that music non-commercially as long as you attribute these compositions to Mubert. “This plan is for you if you need music for your vlog (if you’re not running monetization), podcast or any other kind of content,” Marko says.

The Creator plan is developed for “semi-pros” who are delivering content either for their own personal brand or social media channel. This upgrade means you don’t have to mention Mubert whenever you use its tracks and the music is saved in lossless quality. If you’re an in-house marketer or freelance video editor on the other hand, that puts you in a position where the Pro plan fits best since it gives you the ability to generate unlimited tracks that you can use for paid ads and e-commerce and also use this music for client work.

On top of that, Mubert has more advanced business plans, which were created for those who are looking to use the tracks on radio, TV or to distribute and sublicense that music. These cases are handled on a case-by-case basis.

Since launching on Product Hunt, Marko and the team have seen over 10,000 people use the product, who have generated around 85,000 tracks, with 4,000 of them registering for the service. Leaving numbers behind, the CPO admits that the results vary and there is still a lot of room for improvement, though users have left a lot of positive feedback and highlighted the high quality of the music and the speed with which it is produced. “We are trying our best to improve that level of user satisfaction with [upcoming] features,” he assures.

Talking about the future, Nykoliuk believes that Mubert will continue to provide content creators with the ability to generate highly customized soundtracks with as little effort as possible. Looking at the tech industry in general, the overall landscape is shifting drastically. “We shifted from desktop to mobile; from there, we’re moving into these mixed reality platforms, which will be more and more accessible,” he says.

It’s no surprise that artificial intelligence is getting increasingly better at making taste-based decisions for humans and it will continue to evolve faster than ever before. When it comes to content creation, “AI is going to be able to read the emotions of the scene, the color palette that you’re using in your video, pick up the sentiment of the dialogue that you’re having and feed all of this into the music engine,” Marko says, describing his vision. “[That music engine] will [then] come back with a dynamic soundtrack that will make that content perfect. And of course, it’s all going to be done in the metaverse in real-time.” But hey, maybe we’re running too far ahead and the future will be totally different.